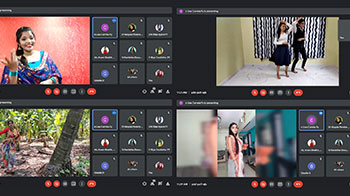 The Talent Search Programme for F.Y.B.Ed Batch of 2020-2022 at STIE was organized by St Teresa's Institute of Education. The students were oriented by Dr. Reshma Rodrigues. All the students were distributed into six groups, with each group pre-recording their programme. The Talent Show was spread out over three days from 22 June to 24 June, and was conducted online via Google Meet. A total of 56 participants were present for the programme. The objective was to provide a platform for all the students to hone and display their talents.

The first day of the programme started with the presentation of Group 1, which comprised the assigned leader Anam Shaikh (43) and Roll nos. 1, 2, 3, 5, 6, 7 and 8. Their theme was 'Cultures across India', celebrating the rich diversity found in our country. Each member showcased the different regional dances of India, along with a fashion show, displaying the various diverse attires worn by the people of India as well as the popular regional dishes.

The performance of Group 6 followed soon after. The leader of the group was Aloysia Pereira (29) and the members were Roll nos. 41, 42, 44, 45, 46, 47, 49 and 50. The theme was 'Indian Cinema'. They beautifully portrayed the progress and development of Indian cinema over the years with short skits, mimicry, dance and singing performances, reminiscent of the popular Indian films. The group member Cheryl Viegas ended the programme with a musical quiz wherein she played the instrumental version of popular Indian songs and the rest of us had to guess the correct answer.

Group 2, comprising Roll Nos. 9 to 15, under the leadership of Srishti Nangalia (26), presented their act on the second day i.e. 23 June 2021. Their theme was 'Domestic Violence'. An emotional skit was presented bringing to light the plight and despair of women suffering from domestic violence, while also creating awareness about how we can help such victims. There was also a recital of a poem, a group singing performance and display of posters, all championing for the cause of women empowerment.

Group 5 was the next to present their pre-recorded Act. The Group Leader was Sr. Sujata Thopelya (48) and included the Roll Nos. 33 – 40. They chose the topic 2020: A Year like No Other. It was a hilarious account of life during the Pandemic and the subsequent lockdown. Students enacted scenes of different scenarios such as Online Education, Virtual Weddings, impact of Believing WhatsApp Forwards, Hoarding Groceries and so on.

The 3rd Day of the Talent Search saw the Presentation of Group 3 on 24th June, 2021. The Group Leader was Sailee Pawar (28) and included the Roll Nos. 16 – 22. They chose the topic Mental Health. They started with a live quiz followed by First-Hand Accounts of group members about their strategies of coping with various Mental Health issues that plagued people during the Pandemic. It included activities such as baking, drawing, dancing, tending to plants, writing poetry, singing, reading, etc.

The last group to present their Act was Group 4. The Group Leader was Sr. Cinthiya Bavighar (4) and included the Roll Nos. 23, 24, 25, 27, 29, 30, 31 and 32. They chose the topic Child Labour. It was a heart-touching performance which included a skit, a dance and creative posters with a message.

After each performance the teachers gave their valuable feedback and comments. The meet concluded with a Vote of Thanks by Dr. Giselle D’souza on behalf of our Principal Sr. Tanuja Waghmare who wasn’t present with us. The Programme and the various Acts put up by the Groups were well received by both Professors and Students. The audience response in the form of positive messages exchanged in the chat box was encouraging to all the participants.