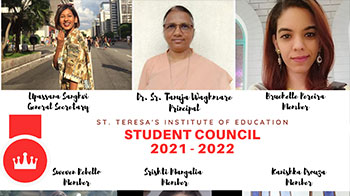 The election for the “Student Council” for the year 2020-2022 was held online, on the google meet platform, on 24th June, 2021. Our Professor Ms. Reshma R was in charge of this well-organized event.

On 23th June 2021, a meeting was held for the entire batch where they were oriented on the various roles and responsibilities of the Student Council. The interested candidates were asked to self-nominate themselves for the election.

On the day of the event, 7 girls nominated themselves to stand in the election for the council. The election began with the candidates giving the class a brief insight about them and how they would like to carry out their role if given the opportunity. A google form link was sent to all students and they were asked to vote for 5 candidates who they were in favor of. The glorious winners who were elected by their batch mates were: Ms. Bruchelle D'Souza, Ms. Kanishka D'Souza, Ms. Sweven Rebello, Ms. Srishti Nangalia and last but certainly not the least, the leader of the Student Council, Ms. Upassana Sanghvi.

The event ended with our principal thanking each candidate who participated in the election and as always motivating us with her positive words.