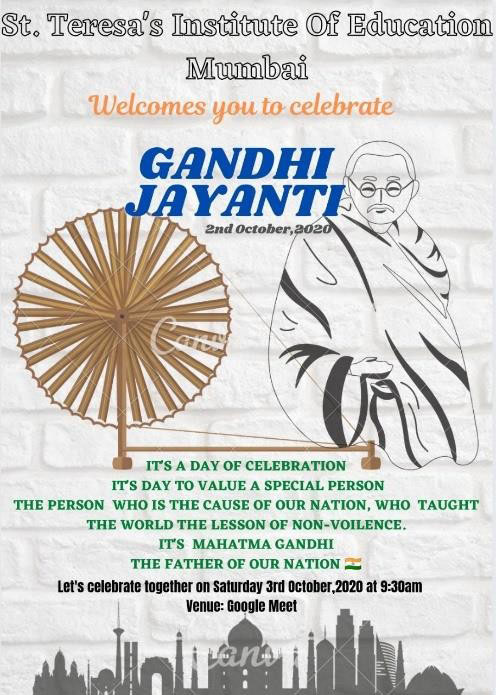 BE THE CHANGE YOU WANT TO SEE

Be the change you want to see was the theme of the Gandhi Jayanti Celebration on 3rd October 2020. The entire celebration was indeed enlightening and filled with great appreciation for the great Mahatma. The celebration began with an assembly as it is always important to be grateful to the lord for keeping us all stay even in these difficult times. The comparing for the program was done by Carishma Nevis. Diana Alexandra conducted the prayer services and played a lovely hymn on the promises of the lord.

The theme was introduced by Carishma Nevis. Mahatma Gandhi was indeed that he wanted to bring a change in the world. Sinora D’chuna spoke about the importance of the theme and how it is relevant even in the recent times. Later on the College Anthem and the National Anthem was played.

Sarah Carvalho, gave her thoughts on Mahatma Gandhi, how he helped in building a healthy nation and how youth can act as catalyst. A video from the movie “Lage raho Munna Bhai” was shown to emphasize on Gandhi’s Principle of Non- violence.

Renica recited a poem on the great Mahatma which spoke about no violence and no guns. A video on the entire life of Mahatma Gandhi was presented to the class which also highlighted his contribution in the freedom struggle and Dandi march.

Alisha introduced the speaker of the day Manisha Karape. She is an eminent personality and the person who follow’s Gandhi’s principle in real life. Manisha spoke about how Mahatma Gandhi started with 79 followers and ended influencing millions of people. She also spoke about how Gandhi used his ego in a positive way.

Larissa Dabre and Priyanka Surve displayed a fun activity by playing quiz to test our knowledge on Gandhi’s life. The program ended with vote of thanks given by Alisha. The efforts of St. Louis internship group and Joan ma’am was appreciated by all the teachers thus making it a grand success.